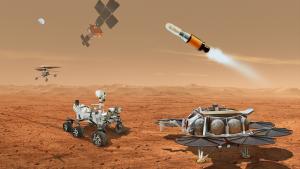 NASA has devised a new plan for bringing samples of Mars to Earth for detailed analysis. A spacecraft (lower right) will land near the Perseverance rover (lower left), which will ferry the samples it's gathered to the lander. If Perseverance is unable to do so, however, two small helicopters (upper left) will fetch the samples. Once loaded, a small rocket (right) will launch from the lander and carry the samples to a waiting orbiter, which then will carry them to Earth. The plan calls for the samples to reach Earth in 2033. [NASA/JPL/Caltech]

There’s been a change of plans for bringing bits of Mars back to Earth. Instead of another rover, scientists will send a couple of helicopters. But it’s still going to take years to get the job done.

The Perseverance rover arrived at Mars early last year. Among other things, it’s examining the planet’s rocks and dirt. It’s looking for evidence that its landing site could have been a comfortable home for life in the distant past. It’s also looking for evidence of life itself.

But the rover’s lab isn’t nearly as sophisticated as those on Earth. So Perseverance is also drilling a few inches into the surface and storing those samples in tubes for return to Earth.

The plan has been for another rover to land nearby, pick up the tubes, and ferry them to a small rocket on yet another lander to start the trip to Earth. But NASA recently changed things up.

Mars is growing brighter by the day. Tonight, it’s quite close to the Moon as they climb into good view, around 10:30 or 11. It looks like a bright orange star.