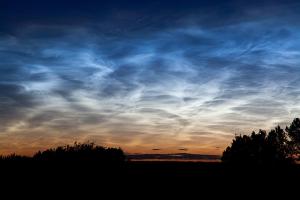 High-altitude clouds shine at nightfall above Edmonton, Alberta, Canada, in this 2011 image. Known as noctilucent ("night-shining") clouds, they're caused by sunlight reflecting off grains of ice high in the atmosphere. They're visible only during twilight, when the Sun is below the horizon at just the right angle to illuminate the clouds. Recent research suggests that rocket exhaust is making the clouds more common. [NASA/Dave Hughes]

The light display from a rocket launch may hang around long after the rocket itself is gone. But the display is visible only from narrow strips of Earth’s surface — mainly from Canada, Scandinavia, and Russia.

The rockets may create bands of noctilucent clouds — Latin for “night shining.” The clouds form at altitudes of about 50 miles — the highest clouds of all. Water vapor freezes around grains of dust from meteors, forming ice crystals. The clouds are visible only about an hour before sunrise or after sunset, when the Sun is at the right angle to light up the clouds but not the ground.

Noctilucent clouds were first reported in the late 1800s. At first, they were seen only fairly close to the poles. In recent decades, though, they’ve crept toward lower latitudes. And they’ve become a lot more common.

Much of the increase may be the result of climate change, which pumps more water vapor into the upper atmosphere. But a recent study says that rocket launches are boosting the clouds as well — especially launches that take place in the morning. That’s when high-altitude winds are most efficient at pushing rocket exhaust toward the poles. And the launch-influenced clouds are most common in July, when the combination of high-level water vapor and temperature is just right.

With the number of launches reaching record levels, so may the reports of noctilucent clouds — beautiful displays in the twilight.