The middle of summer may not be the best time for a steaming pot of tea, but that’s just what the night sky offers. The brightest stars of Sagittarius, which is in the south at nightfall, form the outline of a teapot. And the hazy Milky Way seems to form puffs of steam from the spout.

The puffs are a combination of bright stars and gas, and dark clouds of dust in the disk of the Milky Way Galaxy. And if you look deeply into those puffs, you’ll see quite a few other little puffs of matter — star clusters and the vast clouds known as nebulae.

Two famous ones are directly above the spout, by about the width of your fist held at arm’s length — the Lagoon Nebula and the Trifid Nebula.

The Lagoon is a stellar nursery — a cloud of gas and dust that’s dozens of light-years across. It’s given birth to scores of stars, with more taking shape even now. Through binoculars or a small telescope, it looks like a hazy oval of light. Photographs reveal a reddish-pink glow, which is produced by hydrogen atoms being zapped by the radiation of young stars.

The Trifid is also a hot-pink stellar nursery, but with a different appearance. Dark lanes of dust across its center make it look like three different blobs. There’s also a nearby cloud of dust that reflects starlight, so it glows blue.

Look for these hotbeds of starbirth in the steam rising from the celestial teapot, low in the south on steamy summer nights. 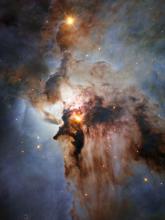