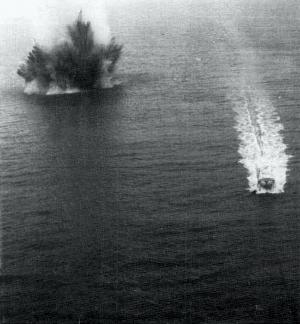 A mine explodes in North Vietnam's Haiphong Harbor during mine clearing operations in early 1973. Many similar explosions were triggered just months earlier by a powerful storm on the Sun. [U.S. Navy]

A spectacular storm on the Sun erupted 50 years ago this week — one of the most powerful ever seen. It produced several giant outbursts, and shot a cloud of charged particles toward Earth. When the cloud got here, it created all kinds of problems. Among other things, it apparently triggered sea mines in a harbor in Vietnam.

The storm began on August 2nd, 1972. The big cloud followed later, and it reached Earth in record time — less than 15 hours. That means it was traveling at more than six million miles per hour.

When the cloud reached Earth, on August 4th, it created auroras that were bright enough to read by. It caused problems with power grids and communications networks in the United States. And it shorted out a Defense Department satellite.

According to the Navy, it also set off magnetic mines in Hai Phong harbor in Vietnam. Naval aircraft recorded a couple of dozen explosions in just two minutes.

The mines were set to explode when they “felt” sharp changes in the magnetic field. The solar storm produced several of those spikes — strong enough, the Navy concluded, to trigger the explosions.

The Navy quickly changed the design of its mines to prevent a repeat. But big solar storms continue to cause big problems. And because we depend on so much more technology today, a storm like the one in 1972 could cause massive damage. But it probably wouldn’t set off any more mines.