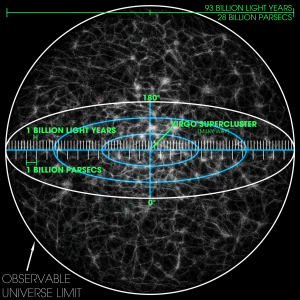 This illustration depicts the "observable universe," which represents everything we can see from Earth. The observable universe currently extends roughly 47 billion light-years in every direction. We actually see the "edge" of the universe as it looked less than 14 billion years ago. The expansion of the universe has since pushed that edge to a greater distance, but we can't see what it looks like today because its light hasn't had time to reach us. Each white dot in the illustration represents a supercluster of galaxies. [Andrew Z. Colvin/Wikipedia]

The fraction we see is known as the observable universe. And from what we see, it’s all the same. Everywhere we look, there’s the same mixture of galaxies and empty space, of stars and gas clouds. And everything seems to follow the same laws of physics.

But we don’t know what’s happening in the rest of the universe — everything beyond the “cosmic horizon” — the limit of our viewing range.

Logic suggests that everything beyond that horizon is just like everything in the observable universe. There’s no reason that the “bubble” of the universe we inhabit should be any different from the universe as a whole. But we just don’t know for sure — and we probably never will.

Scientists can try to draw some inferences, though. If they observe a galaxy cluster that’s 10 billion light-years away, for example, it has its own observable universe. Some of it overlaps our own, but some extends far outside it. If the cluster is being pulled toward the region we can’t see, then scientists might conclude that it’s been dragged by the gravity of something big and heavy — perhaps a giant galaxy cluster far outside the observable universe — something we’ll never see.