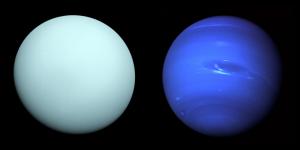 Uranus (left) and Neptune, the Sun's most remote major planets, are classified as ice giants. They are smaller than Jupiter and Saturn, the solar system's largest planets, and have a different composition and structure. They have a thin layer of hydrogen and helium at the top, with water, ammonia, and other compounds below. Those compounds are classified as ices, although they actually form a hot, slushy “ocean.” Their colors are produced by methane and other compounds in the upper atmosphere that absorb redder wavelengths of light and allow bluer wavelengths to shine through. These images were snapped by Voyager 2, the only spacecraft to visit either planet. [NASA/JPL]

Red and green planets huddle close together the next few mornings like bulbs on a strand of Christmas lights. The red one is bright and easy to see, while the green one takes some work.

Orangey red Mars is the brighter of the two. Fainter Uranus is to the upper left at first light tomorrow, and shines pale green. You need binoculars to find it. The planets will change positions over the next few days, but they’ll stay closer together.

Uranus is one of two “ice giants” in the solar system — a category that scientists are still trying to figure out.

Uranus and Neptune are the Sun’s farthest major planets. They’re much bigger and heavier than Earth, but smaller than Jupiter and Saturn.

Until a couple of decades ago, Uranus and Neptune were classified as gas giants, like Jupiter and Saturn. But there are some big differences.

Jupiter and Saturn consist mainly of hydrogen and helium, the lightest of all the elements. Uranus and Neptune, on the other hand, contain mostly heavier elements.

Uranus and Neptune also are put together differently. They have a thin layer of hydrogen and helium at the top, with water, ammonia, and other compounds below. Those compounds are classified as ices, although they actually form a hot, slushy “ocean.”

And scientists aren’t sure where Uranus and Neptune were born. It could have been closer to the Sun, much farther from the Sun, or about where they are today: ice giants far from the Sun.