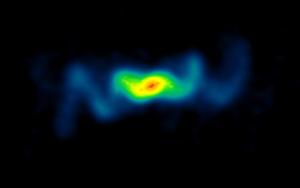 High-speed jets of charged particles spiral out into space from SS 433, a binary system that consists of a giant star and a black hole. Hot gas funnels from the surface of the giant star into a disk around the black hole. Some of the material falls into the black hole, but some is pushed back out by a powerful magnetic field. The black hole is wobbling, so the jets of ejected material spin around like water from a spinning lawn sprinkler, forming the corkscrew shapes. SS 433 is so bright that it's classified as a micro-quasar, and it's the only one in the galaxy. [Blundell & Bowler, NRAO/AUI/NSF]

SS 433 is the only member of its kind in the entire galaxy: a micro-quasar. It consists of a supergiant star, a black hole, a disk of super-heated gas around the black hole, and corkscrews of particles firing into space at a quarter the speed of light.

Full-size quasars are found in the hearts of galaxies. They’re powered by black holes that can be billions of times the mass of the Sun.

SS 433 isn’t nearly that big or massive. The black hole is perhaps eight times the mass of the Sun, with its companion a little bigger. Hence, a micro-quasar.

The two objects are so close together that the black hole pulls gas from the star. The gas forms a swirling disk before most of it falls into the black hole. So much gas is pouring in that it’s super-heated. It emits huge amounts of X-rays, so it’s especially bright.

The black hole shoots some of the infalling gas back out into space. The gas forms two jets — one from each pole. The black hole is wobbling, so the gas spirals out like water from a spinning lawn sprinkler. Seen in profile, the jets form corkscrews that are many light-years long — part of the only micro-quasar in the Milky Way Galaxy.

SS 433 is in the southeast at nightfall. It’s to the upper right of Altair, the leading light of Aquila, the eagle. Despite SS 433’s brilliance, you need a fairly big telescope to see it.