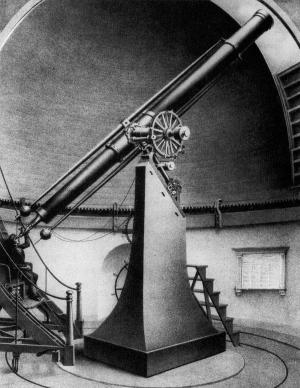 An early illustration depicts the Great Refractor at Harvard College Observatory. It took its first look at the sky 175 years ago. It was funded by donations, including one from former president John Quincy Adams. It took the first daguerreotype (an early type of photograph) of a star, and remained a busy scientific instrument until the 1930s. It was used for educational outreach until the 1970s, when it was retired. It still takes occasional glances at the sky, though. [A. Sonrel/Harvard College Observatory/Wikipedia]

Just about every telescope is an amazing scientific instrument — an “eye” on the universe. But some are much more: They’re works of art. An example is the Great Refractor, at Harvard College Observatory. It took its first peek at the heavens 175 years ago today.

Astronomy was still a young American science then. But a brilliant comet had spurred interest in the field. Harvard took advantage to build a new telescope. It raised almost $26,000 from 94 donors, including former president John Quincy Adams.

The telescope’s heart was a 15-inch primary lens — the largest in the United States for 20 years. It was housed in a 20-foot tube with a veneer of polished mahogany. Some of the fittings were made of brass. The combination made the telescope look like a sculpture as much as a scientific tool.

The telescope first looked at the sky on the afternoon of June 24th, 1847 — a view of the gibbous Moon. At first, astronomers actually looked at the sky through the telescope. Later, they used it to take pictures. In fact, it took the first daguerreotype of a star — Vega, one of the bright highlights of the summer sky.

The Great Refractor remained a busy scientific instrument until the early 1930s. After that, it was used for education and public outreach. It was finally retired in the 1970s. But it’s still there, and still occasionally peeks at the night sky — a beautiful instrument for observing the stars.