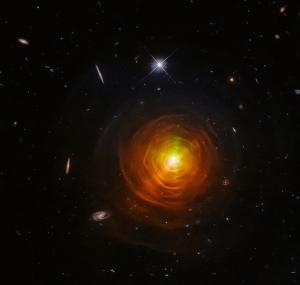 Clouds of carbon surround the star CW Leonis in this Hubble Space Telescope image. The star is fusing helium in its core to make carbon. That process has caused its outer layers to puff up to hundreds of times the diameter of the Sun and created a strong "wind" that blows carbon and other elements into space. Before long, CW Leonis will expel all of its outer layers of gas, leaving only its hot but dead core, known as a white dwarf. The star is about 400 light-years away, in the constellation Leo. [ESA-Hubble/NASA/Toshiya Ueta (Univ. Denver)/Hyosun Kim (KASI)]

A star in the constellation Leo is a carbon factory. And it’s blowing a lot of the stuff out into the galaxy, providing a key ingredient for future stars, planets — and perhaps even life.

CW Leonis is producing so much carbon that it’s known as a carbon star. It’s the closest one — perhaps 400 light-years away.

The star long ago used up the hydrogen fuel in its core to make helium. Now, it’s fusing the helium to forge carbon, some of which works its way to the surface.

The surface layers have puffed up to hundreds of times the diameter of the Sun. And much of their material is being blown into space in a thick “wind.” That’s surrounded the star with giant shells, rings, and arcs, which are continuing to move outward.

Those structures contain a lot of carbon, plus oxygen, nitrogen, and silicon. And they even contain a lot of water — perhaps created by chemical reactions powered by ultraviolet light from the star.

Before long, CW Leonis will expel all of its outer layers. That will leave only its hot but dead core — a white dwarf — which will slowly cool and fade away. But its carbon and other elements will continue to expand into the galaxy — perhaps to be incorporated into future stars and planets.

CW Leonis is due west at nightfall, to the lower right of Regulus, the heart of Leo. CW Leonis is big and bright, but the carbon around it blocks a lot of its light, so you need a telescope to see it.