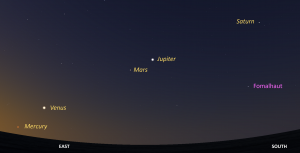 All five of the easily visible planets of the solar system are on parade in the dawn sky. They're aligned based on their distance from the Sun, with Mercury, the closest planet, at lower left and Saturn, the most distant of the quintet, at upper right. This illustration shows the alignment on June 14 and 15. Venus will move closer to Mercury over the following days, with Jupiter and Mars moving farther apart.

Mercury is the closest planet to the Sun, so its surface can be scorching — hot enough to melt lead. But Mercury doesn’t have an atmosphere, so the heat isn’t carried around the entire planet. So regions that never see the Sun can be extremely cold — cold enough for slabs of ice at or near the surface.

The cold spots are found at the poles. The bottoms of some craters there never see the light of day, so they stay cold all the time. And a few spots between the craters stay in the shadows as well.

Astronomers discovered the ice decades ago by bouncing radar beams off Mercury’s surface. The echo of ice is different from that of rock and dirt. A spacecraft in orbit around Mercury confirmed the radar findings.

A recent study revealed more details about the ice. Astronomers had used the giant Arecibo radio telescope in Puerto Rico, which collapsed in 2020. They found that some of the ice in craters at the north pole was almost pure water. And they found possible new deposits in regions where no ice was expected. But some of the pure ice was surrounded by ice that was mixed with dirt. That could change ideas about how and when this hot planet got its cold spots.

Mercury is just peeking into view now. It’s low in the eastern sky as twilight brightens. It’s well to the lower left of Venus, the “morning star.” It’ll climb a bit higher over the next few days. The view is better from the southern parts of the country than the northern.