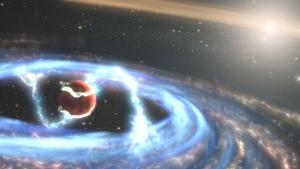 Ribbons of hot gas spiral onto the surface of PDS 70b, a still-growing planet that orbits a newborn star in the constellation Centaurus, in this artist's concept. The planet is encircled by a disk of gas and dust that's being pulled from a larger disk around the star. Magnetic fields may funnel some of the disk material onto the planet. The material is heated, so it produces ultraviolet radiation (depicted as the blue streamers and filaments). The planet probably has been forming for about five million years, but astronomers say it's just about complete. [NASA/ESA/Joseph Olmsted (STScI); Yifan Zhou/McDonald Observatory]

Astronomers have caught several planets in the act of destruction. The planets are so close to their parent stars that their atmospheres are being blown out into space. But they’ve also observed one planet that’s still growing. Hot gas and dust are crashing onto its surface, adding to the planet’s heft.

PDS 70b is already pretty hefty. Estimates say it’s several times the mass of Jupiter, the giant of our own solar system. But it’s continuing to grow. And that’s thanks to the age of its parent star, PDS 70.

The star is only about five million years old. In fact, it’s not yet a full-fledged star. It’s encircled by a wide disk of gas and dust. Some of that material is falling onto the star, while some of it has formed the planet. It’s also formed a disk around the planet.

In a study released last year, astronomers at the University of Texas and elsewhere observed the system with Hubble Space Telescope. They snapped a picture of it at ultraviolet wavelengths, which are invisible to the human eye. The strong ultraviolet light from the planet implies that material is still falling onto the planet from its disk. It may be funneled inward by magnetic fields. The process seems to be slowing down, though — suggesting that PDS 70b is just about fully formed.

The system is in the constellation Centaurus, which is low in the south at nightfall. It’s about 370 light-years away, though, so it’s much too faint to see without a telescope.