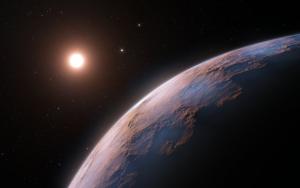 An artist's concept depicts Proxima Centauri d, the third planet discovered orbiting Proxima Centauri, our closest stellar neighbor. Early observations suggest the planet is rocky, like Earth, but only about one-quarter Earth's mass. It may be too close to the star to support life. Another planet, Proxima Centauri b, appears to reside in the star's habitable zone, where temperatures are just right for liquid water--an essential ingredient for Earth-like life--to exist at the surface. Proxima Centauri is in the background, with its two stellar companions, Alpha Centauri A and B, appearing as bright stars close by. [ESO/L. Calçada]

Proxima Centauri is our closest neighbor star — just four and a quarter light-years away. By astronomical standards, that’s just down the block. Yet the star is so puny that you need a strong telescope to see it.

What scientists would really like to see are the star’s three known planets. They’re like something from Goldilocks. The closest planet is too hot for life. The farthest planet is too cold. But the middle planet could be just right.

Proxima produces a tiny fraction as much energy as the Sun does. So the “just-right” planet, Proxima Centauri b, is quite close in — about five percent of the distance from Earth to the Sun. That should place it in the star’s habitable zone. That’s the distance where temperatures are just right for liquid water — a key ingredient for life.

On the other hand, Proxima Centauri produces huge eruptions of radiation and charged particles. They could blast away any atmosphere the planet ever had and sterilize the surface.

A team is working to send a fleet of postage-stamp-size spacecraft to Proxima Centauri. Powered by lasers on Earth, it might take as little as 20 years to make the trip. The craft could beam back pictures of the star and its planets — revealing details about our close neighbors.