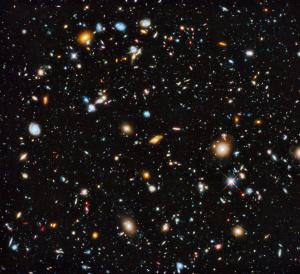 Thousands of galaxies crowd this Hubble Space Telescope image, which required hundreds of hours of observations to compile. The galaxies range from tens of millions to billions of light-years away, and the sample includes graceful spirals, giant ellipticals, and galaxies that are being ripped apart by gravitational encounters with others. The field of view, however, is tiny, covering less than 10 percent the apparent width of the Moon. You could easily cover these galaxies and many thousands more with the tip of your little finger. [NASA/ESA/H. Teplitz, M. Rafelski (IPAC/Caltech)/A. Koekemoer (STScI)/R. Windhorst (Arizona State)/Z. Levay (STScI)]

If you ever want to ponder the vastness of the universe, try this:

Look up into a dark, starry night sky, then hold out your hand at arm’s length in front of your face. Now look at the fingernail on your little finger. That tiny area is covering up millions of galaxies — and perhaps tens of millions. Yet every galaxy is enormous. It spans thousands to millions of light-years, and contains millions to trillions of stars.

More than a decade ago, Hubble Space Telescope spent weeks looking at a tiny patch of sky. Based on the number of galaxies in that patch, astronomers estimated the total number at about 200 billion.

Later, though, another team said there should be 10 times more galaxies — about two trillion in all. But last year, one more study, based on observations by another spacecraft, put the number back in the hundreds of billions. Keep in mind that we’re seeing the most-distant galaxies as they looked when the universe was much younger. By today, they may have merged with other galaxies or disappeared in some other way.

Whatever the number, though, there are lots of galaxies in the universe — so many that you can block out millions of them with the tip of your little finger. 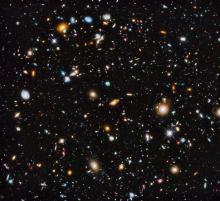