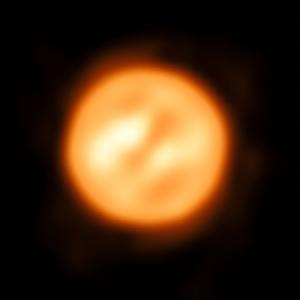 Giant cells of hot gas bubble to the surface of Antares, the bright heart of the scorpion, in this image, which is the most detailed view of any star other than the Sun. The cells, which are lighter than the surrounding material, are far bigger than the Sun. Antares is a supergiant star, hundreds of times the diameter of the Sun. It is destined to explode as a supernova. [ESO/K. Ohnaka]

Other than the Sun, we’ve seen the surfaces of only a few stars in any detail. The stars are all so far away that they’re just pinpoints of light — it’s hard to see them as disks with real features. One of the few we can see is Antares, the bright orange heart of Scorpius. It snuggles especially close to the Moon as they climb into good view by about 10:30 or 11 tonight.

Antares is easier to study because it’s a supergiant — one of the biggest stars in our region of the galaxy. Even so, the details we can see are huge — hundreds of times the diameter of the Sun. Those details are hotspots where pockets of gas are bubbling to the surface.

It’s hard to know the exact size of those features because we don’t know the exact size of Antares, either. Astronomers have measured the star’s apparent size — how big it looks on the sky — with a high degree of accuracy. But to translate that to the star’s true size, we have to know how far away it is. Measuring the distance to a supergiant is hard, though, so estimates vary by quite a bit. But the star probably is somewhere around 600 light-years away — a magnificent star that reveals a few of its features.

Antares is to the right or lower right of the Moon as they rise. They’re separated by only a couple of degrees — the width of your finger held at arm’s length. They’ll move slightly farther apart before they set, in the wee hours of the morning.

Tomorrow: the head of the serpent.