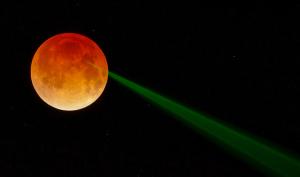 A laser beam takes aim at the Moon during a total lunar eclipse in 2014. Astronomers first bounced a laser beam off the Moon on May 9, 1962. Since 1969, they've aimed at special reflectors left on the surface by both Apollo astronauts and Soviet landers. The observations reveal the precise distance to the Moon and how that distance is changing. Scientists also use the observations to measure the Moon's interior, test theories of gravity, and more. Additional reflectors are scheduled to travel to the Moon aboard robotic probes over the next few years, greatly increasing the accuracy of the readings. [Dan Long/Apache Point Observatory]

As many as a dozen robotic landers are scheduled to head for the Moon in the next three years or so. They’ll study the rocks and soil, look for signs of water, and drive across the surface. And several of them will continue an experiment that’s been going on for more than half a century: lunar laser ranging.

The technique bounces laser beams off special reflectors carried to the Moon by Apollo astronauts and Soviet rovers. Scientists use the technique to probe the Moon’s interior, measure the Moon’s motion, and even study Albert Einstein’s theory of gravity.

The first lunar-laser experiment didn’t have those reflectors, though — it came before anything had landed on the Moon. Instead, scientists bounced the laser beams off the Moon itself. And the first “shot” took place 60 years ago tonight.

The experiment was called Luna See — S-E-E. Scientists and engineers from MIT aimed a red laser at a region of jumbled terrain known as the southern highlands. Over three nights, they fired the laser 80 times and used a telescope to measure its reflection.

Luna See didn’t provide much scientific return. But it did show that you could bounce a laser off the Moon. And that set up the current laser experiment, which should just get better in the years ahead.

The gibbous Moon is high in the sky at sunset. The bright star Regulus — the heart of the lion — stands close below it. They’ll stay close together for the rest of the night.