Evening twilight can be one of the most beautiful times of the day. The light is soft, and the colors of sunset can be intense. But just when twilight ends and night begins depends on which version of twilight you pick.

The version that applies to everyday life is called civil twilight. It begins at sunset and ends when the center of the Sun is six degrees below the horizon — the width of three fingers held at arm’s length. That doesn’t sound like much, but it makes a big difference. By the time civil twilight is over — about 20 to 30 minutes after sunset, depending on the time of year — it’s too dark to drive safely without your headlights.

After civil twilight, there’s nautical twilight. It lasts until the Sun is 12 degrees below the horizon. Although it’s not much of a concern in the era of GPS, by the time nautical twilight ends, it’s dark enough for sailors to use the stars for navigation.

Finally, there’s astronomical twilight, which ends when the Sun is 18 degrees below the horizon. At its beginning, the sky is dark enough to observe brighter stars and galaxies. By its end, all the light of day has drained away, so the night is as dark as it’s going to get. That provides the dark skies needed to observe the faintest objects — distant stars and galaxies that are impossible to study through the glow of twilight.

Of course, the same definitions apply to morning twilight — the end of night and the dawn of a new day. 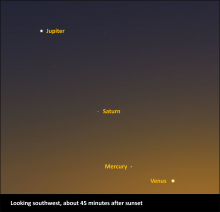