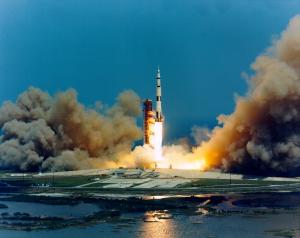 Apollo 16, the next-to-last mission to the Moon, launches in April 1972. It landed in a rugged region in the Moon's highlands, where astronauts John Young and Charles Duke spent three days gathering samples and driving their lunar rover. Their work showed that volcanic mountains on the Moon are few and far between. [NASA]

When the first Apollo astronauts landed on the Moon, it was all about politics. The goal was to get them to the Moon and back by the end of the 1960s, winning a race against the Soviet Union.

But by the time the fifth landing mission headed for the Moon 50 years ago this month, it was all about the science.

LAUNCH CONTROL: Five, four ... The engines now building up to 7.7 million pounds of thrust ... We have a launch commit, and we have a liftoff! The swing arms moving back. We’ve cleared the tower. [11]

Apollo 16 was targeted for a region known as Descartes, in the Moon’s rugged highlands. Earlier missions had landed on the smoother plains. It was thought that Descartes might have been created by volcanoes, and not by asteroid impacts.

Astronauts John Young and Charles Duke landed on April 20th, 1972. They spent three days on the Moon. They made three moonwalks, and drove their lunar rover almost 17 miles. They picked up more than 200 pounds of rocks and dirt. And they set up instruments that operated long after the astronauts returned to Earth.

The samples showed that their landing zone wasn’t built by volcanoes. Instead, the mission demonstrated that volcanic mountains are few and far between — important science from the penultimate mission to the Moon. More about Apollo 16 tomorrow.

Look for the Moon climbing into good view by midnight tonight. It’s trailed by the star Antares, the bright heart of the scorpion.