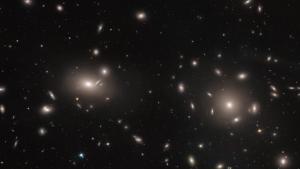 Galaxies stretch from edge to edge in this Hubble Space Telescope image of the Coma Cluster, a collection of more than 1,000 galaxies that spreads across Coma Berenices and adjoining constellations. The two large galaxies are NGC 4889 (left) and NGC 4874. The cluster also contains vast amounts of dark matter, which produces no energy on its own but exerts a gravitational pull on the visible galaxies around it. The cluster is centered more than 300 million light-years away. [NASA/ESA/J. Mack/J. Madrid, et al.]

If you want to see a lot of galaxies, you need to look up — not just up into the sky, but up and away from our own galaxy, the Milky Way. And the best spot for doing that is in and around the constellation Coma Berenices, which climbs high overhead on spring evenings. It’s the location of the north galactic pole — the spot that’s 90 degrees away from the plane of the Milky Way.

That plane outlines the disk of the Milky Way. It’s filled with stars and with clouds of gas and dust. There’s so much stuff that it’s hard to see the intergalactic space beyond.

As you look farther from the glowing band of the Milky Way, though, many more galaxies come into view. Some of them are visible through binoculars, though most of them require a telescope.

In fact, there are large clusters of galaxies in Coma Berenices and the adjoining constellation Virgo. In all, they contain several thousand galaxies. There are many other galaxies over in the opposite direction from Virgo, near the Big Dipper. HETDEX, a large project at McDonald Observatory, is looking at thousands of remote galaxies in that region to study dark energy — a force that’s causing the universe to expand faster as it ages.

Coma Berenices is low in the east at nightfall, then wheels high overhead after midnight. In early evening, the north galactic pole is to the right of the tip of the Big Dipper’s handle. Galaxies are scattered all across that region — high “above” the Milky Way.