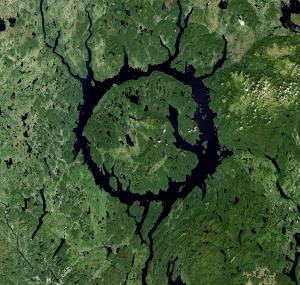 Manicouagan Reservoir in Quebec is one of several impact craters in the province, which has been blasted by major collisions at least nine times in the past 500 million years. Manicouagan, also known as the Eye of Quebec, is a 40-mile-wide ring filled with water, forming one of the largest lakes on Earth. The most recent crater, Pingualuit, is just 1.4 million years old. It, too, is filled with water--some of the purest and clearest on Earth. The plethora of craters in the province is simply coincidence. [ESA/Copernicus Sentinel-2]

Quebec has been a cosmic target. The Canadian province has been hit by big asteroids or comets at least nine times in the past 500 million years. The impacts blasted out craters that are up to a few dozen miles in diameter.

There’s no special reason for the universe to pick on Quebec. The province is almost as big Alaska, though, so it’s a big target.

The most obvious impact scar is Manicouagan. Its main feature is a 40-mile-wide ring that’s filled with water — one of the largest lakes on Earth. Known as the Eye of Quebec, it was gouged more than 200 million years ago by an asteroid about six miles in diameter. Some studies have said the impact might have led to the extinction of much of the life on Earth.

Clearwater Lakes is a pair of craters linked by channels. Both still look nice and round, with raised rims. They’re filled with water. For a long time, scientists said the craters formed at the same time, from an asteroid that split in two, or an asteroid and its moon. But recent work says the larger crater formed more than 450 million years ago, with the other created a couple of hundred million years later.

The most recent crater is known as Pingualuit. It’s just 1.4 million years old. It’s a near-perfect circle about two miles across and a quarter of a mile deep. It, too, is filled with water — some of the purest and clearest on Earth — the aftermath of a cosmic boulder hitting the northern tip of Quebec.