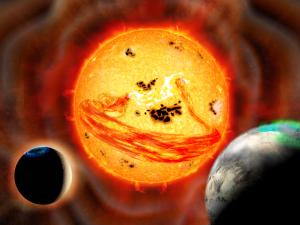 The star EK Draconis "breathes fire" in this artist's concept. In April 2020, EK Draconis produced the biggest eruption yet seen from a Sun-like star. It began with a spectacular burst of radiation, followed by an eruption of charged particles 10 times more massive than anything ever seen from the Sun. The illustration shows two possible planets near the star, along with giant clusters of the dark magnetic storms known as starspots on its surface. EK Draconis is much younger than the Sun, which may be the key to its energetic outburst. [NAOJ]

In modern mythology, dragons are known for breathing fire. And a couple of years ago, a young star in the dragon constellation did just that. It blasted out the biggest eruption yet seen from a Sun-like star.

EK Draconis is in Draco, the dragon. The star is low in the northern sky as night falls. It’s about the same size and mass as the Sun, but it’s more than a hundred light-years away, so you need a telescope to see it.

Astronomers have kept a close eye on the star for decades. They’ve known that it’s a lot more “active” than the Sun — it produces more outbursts of energy and particles. Even so, an outburst in April of 2020 was a knockout. It first produced an explosion known as a superflare. That was followed by a coronal mass ejection — a massive blast of charged particles. It was 10 times more massive than anything ever seen from the Sun. It raced outward at a million miles per hour.

The key to the outburst probably is the star’s age. EK Draconis is only about a hundred million years old — about two percent of the Sun’s age. Young stars generally rotate much faster than older ones. That generates a much stronger magnetic field — and more powerful eruptions.

It’s lucky for us that the Sun is older and calmer. If it produced an outburst like the one from EK Draconis, it could fry our power grids, plunging much of the world into darkness. So, in this case, middle age has its advantages over the fiery nature of youth.