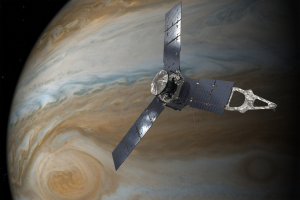 The Juno spacecraft orbits Jupiter in this artist's concept. By mapping the giant planet's magnetic and gravitational fields, Juno has given scientists a better look at conditions inside Jupiter. Juno arrived in July 2016 and is expected to keep operating for several more years. The craft is temporarily out of touch because Jupiter is aligning behind the Sun as seen from Earth, so its radiation interferes with communcations with Juno. [NASA/JPL]

Every once in a while, the planets go into hiding. They pass behind the Sun as seen from Earth, so they’re lost in the Sun’s glare. They can remain hidden for weeks.

Right now, it’s Jupiter’s turn to hide. The solar system’s largest planet is at conjunction — on the opposite side of the Sun from Earth. It’s farthest from Earth now, too — about 555 million miles away.

Solar conjunction gives the teams that operate spacecraft a bit of a break. There’s so much radio interference from the Sun that controllers can’t stay in touch with their craft.

In Jupiter’s case, that’s the Juno mission. It’s been orbiting Jupiter since July of 2016. It’s provided the first good look at Jupiter’s insides. It’s done so by measuring Jupiter’s magnetic and gravitational fields from different altitudes and different locations above the planet. That’s provided a three-dimensional view of the interior.

Those observations have revealed that Jupiter’s core isn’t what scientists expected. Instead of a solid ball of rock and metal, it’s more mushy — it just kind of melts into the layers around the core.

Juno is expected to keep working for at least a few more years — except for some short breaks at solar conjunction.

Jupiter will start to peek into view in the dawn sky by the end of March. But it won’t be an easy target until April — shining like a brilliant star in the eastern sky at first light.

Tomorrow: a brilliant star in the south.