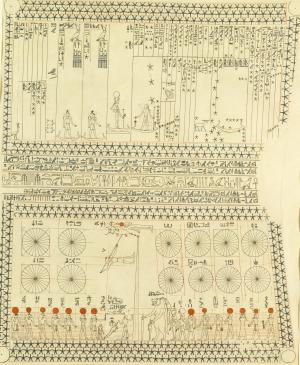 This depiction of the cosmos decorates the ceiling of the tomb of Senenmut, chief advisor to the Egyptian pharaoh Hatshepsut, ancient Egypt's most successful female king. At 3,500 years old, it's one of the oldest known astronomical charts on Earth. The tomb wasn't opened until 1927, so the chart is well preserved. It's divided into northern and southern skies, and depicts the constellations and four of the five naked-eye planets (only Mars is missing). The southern panel also indicates that the Egyptian day was divided into 24 hours, with a different star for each hour. [Metropolitan Museum of Art/Wikipedia]

The Big Dipper wheels across the north on March nights. Tonight, it’s low in the northeast at nightfall, with the bowl above the handle. It passes high overhead at midnight, and is low in the northwest at first light.

This prominent star pattern has been recognized by many cultures, although with different names and descriptions. In ancient Egypt, for example, it was Meskhetyu — the leg of a bull. It’s recorded on one of the oldest astronomical charts on the planet — created 3500 years ago.

The chart decorates the ceiling of a tomb, which was being built for Senenmut. He was the top advisor to Hatshepsut, the most successful of Egypt’s female “kings.” The tomb was never finished, and Senenmut wasn’t buried there. But it remained sealed until 1927, so the ceiling is well preserved.

It’s divided into two panels — one for the northern half of the sky, the other for the southern half. The northern panel shows the constellations, although only one is easy to recognize: the Big Dipper. Its stars were called “imperishable” because they never set; at the time, they always remained above the horizon as seen from Egypt.

The southern panel shows four of the five planets visible to the eye alone — only Mars is missing. The panel may record a conjunction of the four planets. The panel also indicates that the Egyptian day was divided into 24 hours, with a different star for each hour — tracking time by the stars.