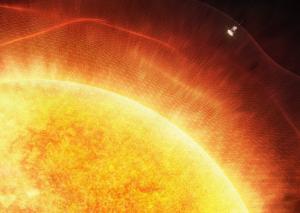 Parker Solar Probe enters the Sun's extended outer atmosphere, known as the corona, in this artist's concept. In early 2021, Parker became the first spacecraft to enter the corona, which is heated to more than a million degrees, approaching to within a few million miles of the Sun's surface. It will approach even closer on subsequent passes over the next few years. [NASA]

You can look at something from afar all you want, but there’s nothing like being there. For the scientists who study the Sun, that means plunging into its hot outer atmosphere. And they’ve done that several times in the last year with Parker Solar Probe — a spacecraft that’s flown close to the Sun’s visible surface.

Humanity has touched the Sun. Parker Solar Probe has allowed us to dive beneath the surface to experience, for the first time, the atmosphere of a star.

The outer atmosphere is the corona. It’s visible during solar eclipses as faint wisps around the Sun. It extends several million miles into space. Scientists weren’t sure of its extent until last April, when Parker made its first pass through the corona — the first passage by any mission.

The corona is heated to millions of degrees by the Sun’s magnetic field, but astronomers aren’t sure how. These encounters will help them explain it. They’ll also show how the corona feeds the solar wind — a flow of charged particles that races through the solar system at a million miles per hour or faster.

Parker Solar Probe follows long, looping orbits around the Sun. It comes close every few months. Heavy shielding protects it from the heat, and it moves faster than any other spacecraft ever. So far, that’s kept it safe during its dives into the atmosphere of the Sun.