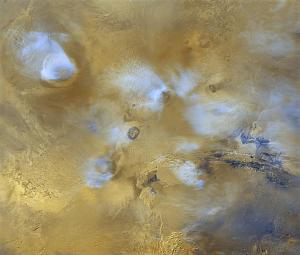 Clouds stream around several of the giant volcanoes of the Tharsis region on Mars in this 2000 image. The largest, Olympus Mons, at upper left, is larger than any volcano on Earth. A recent study, however, found that hundreds or even thousands of small volcanoes and volcanic vents in the region could have added as much molten lava to the surface as the big volcanoes. [NASA/JPL/MSSS]

Our closest planetary neighbors will huddle close to each other over the next few weeks. They’re low in the southeast at dawn. The brighter world is Venus, the “morning star.” It passes closer to Earth than any other planet. The other is Mars, which stays a little farther away. It’s to the lower right of Venus.

Both worlds could be volcanically active today, or they could have been active in the recent past.

A region on Mars known as Tharsis contains several giant volcanoes. The largest is about 15 miles tall and as big as Missouri. These volcanoes may have been active within the past few million years.

A recent study found that Tharsis also contains more than a thousand small volcanoes — no more than a few hundred feet tall. The youngest could be just a few million years old. Together, they may have belched as much lava as the big volcanoes. They may sit on a patch of crust that’s thicker than the patch below the big volcanoes. That makes it harder to build big volcanoes, so the region produces a bunch of little ones instead.

Venus is covered with many old volcanoes. The thinking has been that it’s a dead world, with a single solid crust instead of separate plates like those on Earth. But a study found evidence that parts of the crust are moving in different ways. That suggests that Venus does have separate plates, but they move more slowly than those on Earth. So Venus may not be dead at all — just a little bit slow.