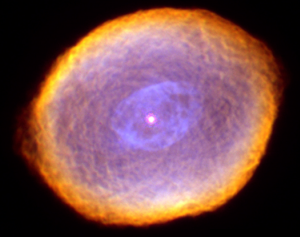 Like a beautiful butterfly emerging from its cocoon, layers of gas escape a dying star in this image from Hubble Space Telescope. It's known as the Spirograph Nebula because of its resemblance to the colorful geometric shapes created with an old children's toy. The nebula began taking shape about 50,000 years ago, as the nuclear reactions in the star's core shut down and the star began expelling its outer layers. Since then, several major eruptions have sculpted the nebula. It's about a third of a light-year across, and it continues to expand. [NASA/Hubble Heritage Team (STScI/AURA)]

For most of its life, a star like the Sun is drab. Seen from afar, it’s just a pinpoint of light. When the star dies, though, it’s like a caterpillar leaving its cocoon — as a beautiful butterfly.

As the nuclear engine in its core shuts down, a star sheds its outer layers of hot gas. They form a colorful bubble known as a planetary nebula. The nebula can glow for thousands of years as it expands and cools. The star’s rotation and magnetic field, as well as any companion stars, can sculpt the nebula into incredible shapes.

One of the most impressive planetary nebulas is known as the Spirograph. That’s because it resembles the geometric shapes produced by the old children’s toy. It’s probably more than 4,000 light-years away.

The Spirograph probably began taking shape about 50,000 years ago as seen from Earth, when the star expelled a shell of gas. A second outburst followed about ten thousand years ago. Both of those shells have faded.

About 2600 years ago, however, a third outburst produced the nebula that’s visible today. It spans about a fifth of a light-year, and it’s filled with filaments and bubbles of gas that produce its amazing appearance. The Spirograph should remain visible for thousands of years before it dissipates and vanishes.

The nebula is in Lepus, the hare, which bounds below the feet of Orion, which is in the southern sky on winter evenings. But you need a telescope to see this final act of a star.