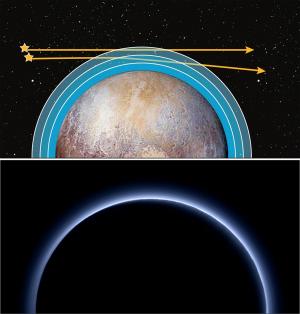 Pluto's atmosphere is freezing and collaping onto the little world's surface, according to recent reports. Astronomers keep tabs on the atmosphere by watching as stars pass behind Pluto. As a star's light passes through the atmosphere (diagram, top), it reveals the atmosphere's height, density, and other details. New Horizons captured a backlit view of the atmosphere as it sailed beyond Pluto in 2015 (bottom). The atmosphere could completely collapse by 2030 as Pluto continues to move farther from the Sun's warmth. [NASA/JHUAPL/SWRI (2)]

Pluto is losing its air. It’s going into a sort of hibernation. The atmosphere will freeze onto Pluto’s icy surface. But it’ll come back — in a couple of centuries.

Even at its best, Pluto’s atmosphere is quite thin. It’s made mainly of nitrogen — the same element that makes up most of Earth’s air. And it’s extremely cold — hundreds of degrees below zero.

Pluto was closest to the Sun a couple of decades ago. The Sun warmed the surface, causing some of the frozen nitrogen and other ices to vaporize. Today, though, Pluto is moving away from the Sun. At its most distant, in about a century, it’ll be almost two billion miles farther than when it was closest. That will make it much colder, so nitrogen in the air will freeze onto the surface.

The atmosphere was still in full bloom when the New Horizons spacecraft flew past Pluto in 2015. But it’s begun to thin out since then. Astronomers keep tabs on it by watching as stars pass behind Pluto. Starlight filters through Pluto’s atmosphere as a star disappears and reappears. The way the star dims and brightens reveals details about the atmosphere.

Since 2016, several of these vanishing acts have showed that Pluto’s atmosphere is getting thinner. It’s still there, but it probably won’t be for long. Some studies say it could disappear by the end of this decade — going into a long hibernation.

We’ll talk about a possible chip off a world like Pluto tomorrow.