There are plenty of hot topics in modern-day astronomy: exoplanets, black holes, galactic archaeology, and many more. And some of the topics involve not just what we learn about the universe, but how we learn about it. One example is machine learning.

Astronomers are awash in data. Many projects and telescopes generate terabytes of data every week, or even every day. Sorting through all those observations is painstaking work. Some projects rely on volunteers to help them out.

Computers can do the work faster than people, but not always more accurately. They don’t understand what is or isn’t what astronomers are looking for.

Machine learning is changing that. Scientists feed examples of what they want to see to computers, and the machines learn from the repetition. After a while, they learn enough to outperform humans.

In recent years, for example, astronomers have used machine learning to sort through X-ray images to classify types of galaxy clusters and individual galaxies. And they’ve had the computers sift through huge piles of images from TESS, a planet-hunting satellite that also reveals exploding stars, variable stars, and other objects that can change rapidly.

These projects and many others can help astronomers keep up with the torrent of data while learning much more about our changing universe — all with the help of machines.

Tomorrow: counting off the planets of the solar system. 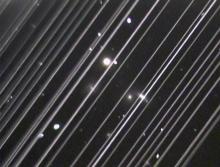