The American space program is gearing up to send astronauts back to the Moon. A test flight of their new capsule and booster is scheduled for later this year. A series of robotic missions will begin this year as well. Many of those missions will look for frozen water and other resources to sustain human expeditions.

A half-century ago, NASA was winding down its first wave of lunar exploration. The final Apollo missions were scheduled for launch in 1972, and the space agency was planning its next step. And 50 years today, it got the okay to go ahead. President Richard Nixon approved the space shuttle — a reusable rocket ship to carry astronauts to Earth orbit quickly, reliably, and often.

It took almost a decade to get the shuttle ready to fly, though. And it never performed the way NASA said it would. It cost more, flew less, and proved to be tricky to operate. Two of the shuttles were destroyed in flight, killing 14 astronauts.

Yet the shuttle did ferry satellites to space, including Hubble Space Telescope and a mission to Venus. Astronauts conducted scientific research, and assembled the International Space Station. The shuttle was retired a decade ago — 40 years after it was given a “go” to proceed.

The destination for the next generation of spaceships — the Moon — has a brilliant companion tonight: the planet Jupiter. It’s close to the upper right of the Moon as night falls. They drop from view about 8:30 or 9. 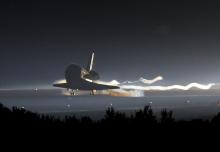