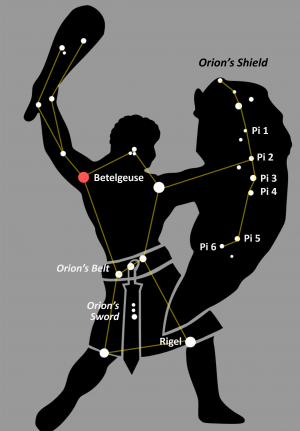 The stars that outline Orion's Shield share a name: the Greek letter "pi." The stars are numbered from top to bottom. Although many constellations have stars with the same Greek letter designation, it's rare to have so many. [Sanu N/Wikipedia]

Four of the five planets that are easily visible to the unaided eye line up in the southwest as night falls the next few evenings. But one of them won’t stick around for long. A couple of weeks from now, it will have pulled into view in the morning sky.

That one is Venus, which has reigned as the “evening star” for months. It’s quite low as the Sun sets, so you need a clear horizon to spot it — any trees or buildings will block it out. But it’s quite bright, so it’s not hard to find.

Venus is about to cross between Earth and the Sun. As it does so, it’ll move from the sky to the morning sky. It’ll become visible there in a couple of weeks, and be an easy target by the end of the month.

The planet Mercury stands close to the upper left of Venus. It’s moving higher into the evening sky, so it’ll be a little easier to see over the next few days. It will vanish in the twilight in a couple of weeks.

Mercury is climbing toward Saturn, which is to the upper left. They’ll draw quite close next week, but they won’t quite catch up to each other. Saturn will quickly follow Mercury into the twilight.

The final planet is Jupiter, the giant of the solar system. It’s to the upper left of Saturn, and shines brilliantly — second only to Venus. Jupiter will linger in the evening twilight for a while. It’ll drop from view in mid to late February — then return to view in the morning sky in April.