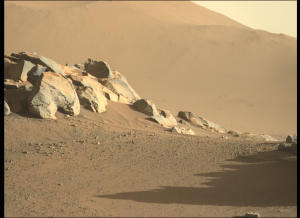 Large rocks line the path of the Perseverance rover as it rolls across the floor of Jezero Crater on Mars. Although the crater is dry today, Perseverance has found evidence that it was filled with water billions of years ago. Perseverance and other Mars missions are studying how the Red Planet lost its water, and continues to lose water today. [NASA/JPL/ASU]

Mars is beginning to creep into the dawn sky. It’s quite low in the southeast during twilight, so it’s tough to spot. The planet is rising a little earlier each day, though, so it’ll be a much easier target by the end of the month.

The Perseverance rover has been trundling across the Red Planet since February. It landed in Jezero Crater — a big hole in the ground that once was filled with water. Perseverance’s early work has shown that the water probably stuck around for a while — long enough to make Jezero an inviting home for life.

All that water disappeared billions of years ago. So did most of the rest of the water on Mars, which was warm and wet in the distant past. Scientists have been trying to figure out where it all went.

A lot of it escaped into space. Mars’s gravity is weak, so water molecules are easily carried into the upper atmosphere. There, they can be split apart by sunlight, and the individual atoms blown away by the solar wind. And a recent study found that Mars loses a lot more water when it’s closest to the Sun, and when it has giant dust storms, which heat the air and carry water high into the sky.

But the rate at which Mars loses water to space isn’t nearly enough to account for everything it’s lost. Other studies have concluded that a lot of it was chemically bound with minerals on the surface. And still more probably trickled deep below the surface — where it’s awaiting discovery by future explorers.