A young star in Orion presents a mystery. More than a decade ago, it twice faded by a good bit, for several weeks each time. Astronomers had a possible explanation. But the star hasn’t faded that way again, so they need a new explanation.

PDS 110 is about a thousand light-years away. It stands close to Orion’s Belt, which is in good view in the east by about 8 p.m. And PDS 110 might be related to the stars of the belt — they probably all formed from the same cloud of gas and dust.

PDS 110 is only about 10 million years old. It may not even be a full-fledged star yet — it’s just entering the prime of life.

In 2008 and 2011, it faded by almost a third, for a few weeks each time. It was suggested that the star had a companion — a giant planet or a brown dwarf — that was encircled by a giant system of rings. When the companion was in the right place in its orbit, the rings passed in front of the star, blocking part of its light.

Astronomers expected to see a similar dimming in 2017. They watched PDS 110 for weeks from a dozen observatories. But nothing happened. They also looked up observations made up to 50 years earlier — again with no big fades.

Since the star is so young, it’s surrounded by dust left over from its formation. Big clumps of dust might have passed in front of the star during the earlier events. But astronomers are still trying to figure out for sure what caused the big fades from this young star. 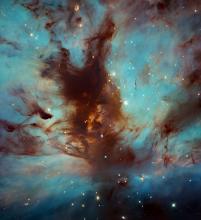