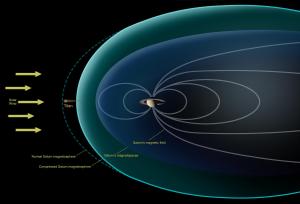 The planet Saturn generates a powerful magnetic field that usually encompasses Titan and its other moons. At times, though, it's compressed enough by the solar wind -- a steady stream of charged particles from the Sun -- to leave Titan unprotected. The solar wind sculpts Saturn's magnetic field into a tear-drop shape. The Sun-facing side of the magnetic field is compressed toward Saturn, while the trailing side extends much farther into space. [ESA]

The giant planets of the outer solar system have giant families of moons. Saturn, for example, has more than 80 known moons. The planets protect the moons by enfolding them in their own magnetic fields — some of the time.

Saturn’s magnetic field is generated deep within the planet. Saturn’s core is made of rock and metal. It’s surrounded by a thick layer of hydrogen. That layer is squeezed so tightly that it acts like a metal. The core and the metallic hydrogen rotate at different rates. That produces an electric dynamo that generates the magnetic field.

Saturn’s magnetic field is hundreds of times stronger than Earth’s. It deflects much of the solar wind — a flow of charged particles from the Sun — as well as cosmic rays, which are particles from outside the solar system.

But the solar wind sculpts the magnetic field into a teardrop shape. The region that faces the Sun is squeezed in toward Saturn. The region away from the Sun forms a tapered tail that extends millions of miles into space.

So depending on how far it is from Saturn, a moon may be protected when it’s on one side of the planet, but unprotected on the other — and subject to the full force of the solar wind.

Look for Saturn near our own moon tonight. It looks like a bright star, just above the Moon at nightfall. They’re flanked by two brighter planets — Venus to the lower right, and Jupiter to the upper left. More about the Moon and Jupiter tomorrow.