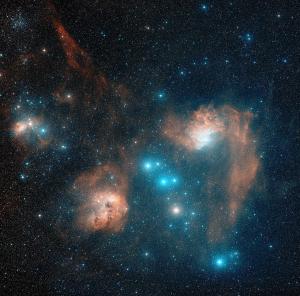 The hot, bright star AE Aurigae sets surrounding clouds of gas and dust ablaze. The red regions are clouds of hydrogen gas that glow like fluorescent lights when they're bombarded by ultraviolet energy from the star. The blue regions are clouds of dust that reflect the star's visible light. The glowing complex is known as the Flaming Star Nebula. It's about 1,500 light-years away in Auriga the charioteer, and spans about five light-years. AE Aurigae is to the upper right of center, embedded in the nebula. A small star cluster is at upper left. [Davide De Martin & the ESA/ESO/NASA Photoshop FITS Liberator]

A star that was kicked out of its birthplace is really lighting things up. The supergiant star illuminates a cloud of gas and dust, creating a colorful display known as the Flaming Star Nebula.

The nebula is in Auriga the charioteer, which is in the northeast at nightfall, marked by the bright star Capella. The nebula is to the lower right of Capella, and is an easy target for small telescopes.

The star that’s responsible for the nebula is AE Aurigae, and it’s pretty amazing. It’s more than 20 times as massive as the Sun, and about 60,000 times brighter.

It probably was expelled from a stellar nursery in Orion as part of a ballet involving four stars. It got such a big “kick” that it’s a runaway — it’s moving far faster than most of the stars in the Milky Way. And right now, it’s moving through a cloud of gas and dust that’s several light-years across — the material that makes up the nebula.

The surface of AE Aurigae is tens of thousands of degrees hotter than the Sun’s. That’s one of the keys to making the nebula shine, in shades of red and blue.

Stars that are so hot produce a lot of ultraviolet light. It rips apart atoms of hydrogen. When the atoms come back together, they emit red light. And the blue light is a reflection — visible light from the star reflecting off small grains of carbon and other molecules.

Combined, the red and blue make the nebula look like it’s on fire — the Flaming Star Nebula.