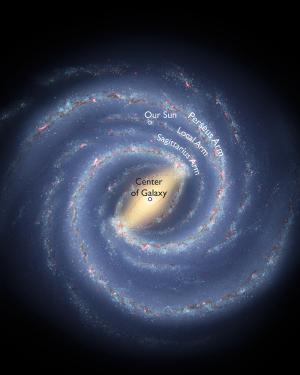 Our solar system lies in the Local Arm, one of several spiral arms that wind around the core of the Milky Way Galaxy. Recent research indicates that the Local Arm is longer and more prominent than previously thought. [Robert Hurt, IPAC; Bill Saxton, NRAO/AUI/NSF]

The bright star Deneb stands high in the west-northwest at nightfall. It represents both the tail of Cygnus, the swan, and the top of the Northern Cross. And if you have a dark sky, you can see that it’s immersed in the glow of the Milky Way — the light of millions of stars that outline the disk of our home galaxy.

Many of those stars are in the same feature of the galaxy as the solar system — the Local Arm. It’s one of several spiral arms that make the Milky Way look like a pinwheel spinning through space.

For a long time, it wasn’t considered an “arm” at all. Instead, it was classified as a “spur” — a short spike sticking off one of the major spiral arms. But over the last couple of years, several studies have found that it’s a lot longer than thought.

Both studies found that the Local Arm extends for at least 25,000 light-years. That’s not nearly long enough to loop all the way around the galaxy. And it may not “loop” at all — it may extend straight across the galaxy. Yet it’s clear that the Local Arm is bigger than expected — an impressive neighborhood for the Sun, Deneb, and most of the stars we see in the night sky.