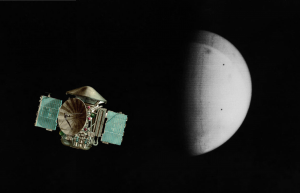 The Soviet spacecraft Mars 2 approaches the planet in November 1971 in this view, which combines an illustration of the craft with a Mariner 9 photo of Mars. Almost no features are visible in the Mars picture because a major dust storm was in progress, blanketing almost the entire planet. Mariner 9 was able to wait it out and conduct its observations from orbit. The Mars 2 lander, which couldn't be reprogrammed, crashed while attempting to touch down, becoming the first human artifact on the Red Planet. [NASA (2)]

Mars has many ways to “get” a visiting probe. It’s cold, it’s dry, and its air is thin, for example. But the biggest threat is dust storms. In fact, a giant storm may have doomed the first object to hit the Martian surface.

Mars 2 was dispatched by the Soviet Union in May of 1971. It consisted of an orbiter and a lander. They arrived at Mars 50 years ago today.

But a massive dust storm was under way. It covered the entire planet. Only the tops of a few tall mountains peeked above it.

An American spacecraft, Mariner 9, had entered orbit around Mars a couple of weeks earlier. It was designed to be flexible. So when scientists saw that Mars was hidden from view, they waited a couple of months to begin its work.

Mars 2 and a sister mission, Mars 3, didn’t have that flexibility. They were programmed to dispatch their landers shortly before they arrived at Mars, and those instructions couldn’t be changed. So the Mars 2 lander dropped into that massive dust storm on November 27th, 1971.

And things didn’t go well. The landing system malfunctioned, and the parachute didn’t open — perhaps influenced by the dust storm. So the Mars 2 lander crashed — the first human artifact on the surface of Mars.

The orbiter continued its mission, but it didn’t see much through the dust. It did obtain important readings on the Martian atmosphere and magnetic and gravitational fields — adding to our then-meager knowledge of the Red Planet.