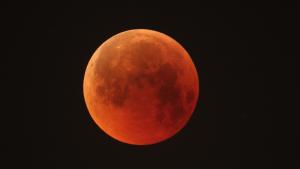 The Moon will experience a near-total eclipse on the night of November 18 as viewed from the United States. Earth's dark inner shadow will blanket almost the entire lunar disk, with the remaining sliver in the lighter outer ring of shadow. Except for a small slice of the East Coast, where the Moon will set shortly before the eclipse ends, the entire United States will see the whole event. [NASA]

The second lunar eclipse of the year takes place late tonight. Although it’s not a total eclipse, it’ll be hard to tell the difference. The whole thing will be visible from all of the United States, except for a sliver of the East Coast, where the Moon will set shortly before the eclipse ends.

A lunar eclipse occurs when the full Moon passes through the dark central portion of Earth’s long shadow, known as the umbra. The Moon’s orbit is tilted a bit, so most months the Moon passes a little above or below the shadow. An eclipse occurs only when the geometry is just right.

On average, that happens two or three times per year. Some eclipses are total, so the Moon is completely immersed in the shadow. Others are less complete, so they’re known as partial eclipses. Any spot on Earth will see an average of about one lunar eclipse a year, and all or part of a total eclipse about once every other year.

Tonight’s eclipse gets started at 1:18 a.m. Central Time, when the umbra first touches the lunar disk. At the eclipse’s peak, less than two hours later, the umbra will cover 97 percent of the Moon’s diameter. The remaining sliver will be in Earth’s faint outer shadow, so the entire lunar disk will be at least partially shaded. It’ll look orange or red — the result of sunlight filtering through Earth’s atmosphere. The partial eclipse ends at 4:47, when the Moon leaves the umbra behind — and returns to the sunlight.