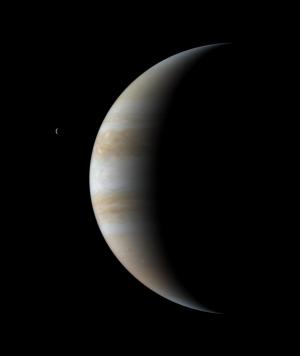 The Cassini spacecraft snapped this portrait of Jupiter and its volcanic moon Io in 2001. Io is covered with massive volcanoes. Some of their eruptions are so powerful that they blast material into orbit around Jupiter. These particles are given a charge by Jupiter's magnetic field, creating strong radiation belts. The radiation is powerful enough to damage or destroy unshielded electronics and to harm or kill unprotected humans. That is only one of the challenges of exploring the Jovian system. [NASA/JPL/University of Arizona]

A dozen people have walked on the Moon, and others may lope across its surface later in this decade. But it’ll be a long time before we can send anyone to Jupiter.

In part, that’s because it’s so far away — it takes years to get there. We’ll probably need new types of rockets — perhaps with nuclear power — to cut down the travel time.

Also, there’s no place on Jupiter to land. The planet’s outer layers are made of gas, so there’s no surface. And as you descended through them, temperatures and pressures would quickly destroy any craft. So visitors to Jupiter itself probably will float through the clouds in its atmosphere.

And just getting close to Jupiter is also a problem. The planet’s powerful magnetic field generates radiation belts that are thousands of times stronger than Earth’s. Robotic spacecraft are protected by heavy shielding. And without similar shielding, it wouldn’t take long for an astronaut to absorb a dose that could be harmful — or deadly. And the radiation is a problem even if you stay away from Jupiter itself and land on one of the planet’s big, icy moons.

So the Sun’s biggest planet isn’t likely to receive human visitors for many decades.