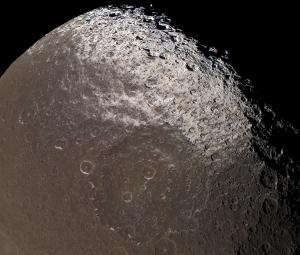 An up-close view of Iapetus reveals that the large moon of Saturn has a two-toned appearance. The white material is ice, which covers almost an entire hemisphere (this view shows only a small portion of the hemisphere). The other hemisphere is completely dark. It is coated with material that may have been blasted off the surface of another moon, Phoebe, during collisions with big space rocks. The equator of Iapetus features a ridge of tall mountains, making the moon look a bit like a walnut. Jean-Dominique Cassini discovered the moon 350 years ago, on October 25, 1671. This image was snapped by the Cassini spacecraft in 2004, from a distance of about 107,435 miles (172,900 km). [NASA/JPL/Space Science Institute]

One of the moons of Saturn is two-toned. One hemisphere is bright, while the other is as dark as coal. And the difference may be caused by another moon.

Iapetus was discovered 350 years ago today by Giovanni Cassini. The moon is about 900 miles in diameter and more than two million miles from Saturn. A ridge around its equator makes it look like a walnut.

As Cassini studied his discovery, he noticed something odd: He could see it only when it was on the western side of Saturn, not the eastern. He soon figured out that Iapetus always keeps the same hemisphere turned toward Saturn, just as the same hemisphere of our moon always faces Earth. Cassini also realized that half of the moon must be bright, the other dark.

We got a good look at that two-toned appearance from the Cassini spacecraft, which orbited Saturn for more than a decade. It showed that there’s a sharp line between light and dark.

The leading hemisphere of Iapetus probably gets coated with dust from Phoebe, another moon. The dust traps sunlight during the day, warming the ice below it. Some of the ice vaporizes and migrates to the trailing hemisphere, where it’s nighttime. Once there, it freezes — making the dark side darker and the bright side brighter.

Saturn is due south at nightfall and looks like a bright star, well to the right of brighter Jupiter. Iapetus is so faint that you need a telescope to see it — no matter which hemisphere is facing Earth.