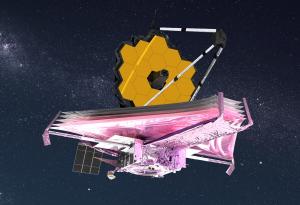 This artist's concept depicts James Webb Space Telescope at work. Webb, which is scheduled for launch this fall, is the largest space telescope ever built. It is also the most complicated and expensive, with a total price tag nearing $10 billion. It will assume a station roughly one million miles from Earth, where it will have a clear view of the cosmos, unobstructed by Earth or the Moon. Its mirror (gold surface, at top) consists of individual segments that will unfold and lock into position in space. The telescope will study newborn stars, exoplanets, early galaxies, and many other objects and phenomena. It will be protected from the Sun's rays by a multi-layer shield (bottom), which makes it look like the telescope is surfing through space. [NASA]

James Webb Space Telescope isn’t like any other telescope — in space or on the ground. Its main mirror, which will gather and focus starlight, is so big that it has to be folded for launch. The mirror is made of a material that’s rarely used in telescopes. And it’s coated with a thin layer of gold — the better to see the universe at infrared wavelengths.

The telescope is scheduled for launch this fall. It’ll travel to a point that’s a million miles “behind” Earth as seen from the Sun. That will give it a constant view of the universe, and eliminate any glare from Earth or the Moon.

Webb will be the biggest and most expensive space telescope ever launched. It’s taken more than a decade to develop, at a projected cost of about 10 billion dollars.

Webb’s main mirror spans about 21 feet. It consists of 18 hexagons that fit together like the tiles on a floor. They’re made of beryllium — a strong but lightweight metal. Small motors will fine-tune their position to create the right shape for the overall mirror. The shape has to be accurate to within one ten-thousandth of the width of a human hair.

A shield will protect the telescope from the Sun. That’s especially important for an infrared telescope, which studies some of the coldest objects in the universe.

After Webb is launched, it’ll take months to get it ready for work. But if everything goes as planned, we could see its first pictures and other results by late spring.