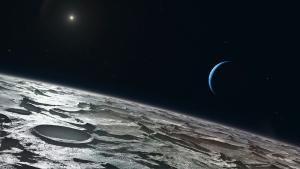 A crescent Neptune shines above its largest moon, Triton, in this artist's concept. The illustration is based on images from Voyager 2, which flew past Neptune and its moons in 1989. It found an icy landscape with regions that resemble the skin of a cantaloupe, plus geysers erupting dark plumes high into the sky. The geysers may form as sunlight warms ices below a layer of frozen nitrogen. The ices expand, then burst through the nitrogen and climb high into the sky. As their material falls back to the surface it forms long, dark streaks. Triton was discovered 175 years ago, just weeks after the discovery of Neptune. [ESO/L. Calçada]

Triton is one of the most interesting moons in the solar system. It has a thin atmosphere and volcanic activity. And geysers of dark ice squirt up to five miles high, depositing material up to a hundred miles away.

Triton is a little smaller than our own moon. It’s the only major moon that orbits backwards — in the opposite direction from the rotation of its planet. And it’s the coldest major body yet measured in the solar system — colder even than Pluto, which is farther from the Sun.

Our only close look at Triton came from Voyager 2, which flew past it in 1989. Its pictures showed that Triton has a young surface. Instead of being scarred by ancient impact craters, it’s covered by young volcanic plains. Much of the surface looks like the skin of a cantaloupe.

Voyager also found that Triton has an atmosphere. It’s extremely thin, but it’s thick enough to support plumes from the geysers. The geysers may form as sunlight warms ices below a layer of frozen nitrogen. The ices expand, then burst through the nitrogen and climb high into the sky.

The gravity of nearby Neptune could heat frozen water below Triton’s surface, creating an ocean of liquid water — one more intriguing feature on this distant moon.