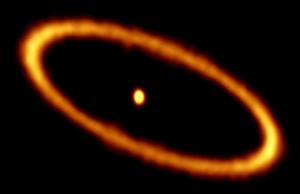 A bright ring of dust encircles the star Fomalhaut in this image from ALMA, an array of radio telescopes in Chile. The ring is fed by dust from comets that have smashed together. This is one of several rings around the young, bright star, which is visible in the southern sky on autumn evenings. The ring is about 13 billion miles (20 billion km) from Fomalhaut, and about 1.3 billion miles (2 billion km) wide. The ring may be held in place by the gravitational influence of a giant planet, although a putative planet seen in Hubble Space Telescope images turned out to be a blob of dust. [ALMA (ESO/NAOJ/NRAO)/L. Matrà/M. A. MacGregor]

Autumn has few bright stars to call its own. In fact, it really has only one major star: Fomalhaut. And not surprisingly, it’s known as the Autumn Star. It’s low in the southeast as night falls now, far to the lower left of the planet Jupiter, which looks like a brilliant star.

If you see Fomalhaut, you’ll notice that there are no other bright stars anywhere around it. That’s a bit misleading, because Fomalhaut appears to have two companion stars. That makes it a triple system. Both companions are faint, though, so you can’t see them with the eye alone.

It’s hard to be sure that such widely separated stars really do form a system. The stars share the same motion through space, they have the same composition, and they’re the same age. That suggests that they were born together, from the same cloud of gas and dust.

Astronomers can’t be certain the stars are bound to each other, though, without plotting their orbits. But it would take millions of years for the stars to complete a single orbit, so there’s no way to confirm that Fomalhaut and its faint companions really are stellar siblings.