A thousand years ago, a Sun priest might have watched a hillside on the outskirts of present-day Tucson. In particular, he would have been looking for a dagger of sunlight to pass across a spiral carved into the rocks — an indication that autumn was arriving.

Researchers at LSU studied a site known as Picture Rocks. It contains hundreds of petroglyphs — pictures carved into the rocks. Most of them show people or animals. The pictures probably were created by the Hohokam culture, around a thousand years ago.

One of the glyphs is a spiral. A tall triangle of light, known as a Sun dagger, slices across it around the equinoxes, with another around the summer solstice. The daggers are formed by sunlight passing through notches carved in the rocks near the spiral. That indicates that the light show is intentional, and not a chance alignment.

The researchers say the alignments probably weren’t designed to mark specific dates. Instead, they marked important periods of the year. Priests would have watched a dagger cross the spiral, perhaps chanting prayers and making offerings.

Sun daggers are found all across the Southwest. Most of them probably served similar purposes — helping native cultures mark the changing seasons.

And the season is changing today. It’s the autumnal equinox. The Sun crosses the equator from north to south, beginning a season that will last until the solstice, in December.

More about the equinox tomorrow. 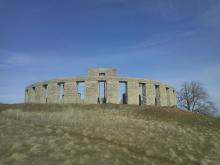 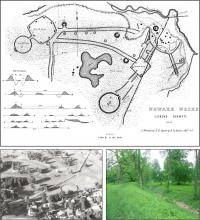