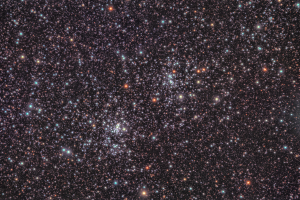 Hundreds of stars glow in the Double Cluster, a pair of star clusters in Perseus. The clusters are about 7,500 light-years from Earth, and contain more than 10,000 stars. Many of the stars are hot and bright, making the clusters shine brightly. [Chrisguidry/Wikipedia]

There’s nothing quite like the Double Cluster — two bright star clusters that stand side by side. They’re easily visible to the unaided eye — especially under dark skies, away from the troublesome glow of city lights. The clusters are in the northeast at nightfall, below the “W” outlined by Cassiopeia. They wheel over to the northwest by first light.

The clusters are known individually as NGC 869 and 884. They’re about 7500 light-years away. Combined, they’re about ten thousand times the mass of the Sun. Yet they contain more than 10,000 stars. The Sun is a fairly heavy star, so there are a lot more stars that are “skinnier.” So the clusters have a lot of stars that are small and feeble.

Fortunately for skywatchers, the clusters are young — only about 13 million years old. At that age, they still have quite a few stars that are big, bright, and massive. Those stars are the reason the Double Cluster is easily visible. The stars will burn out and expire fairly soon, though, so the clusters will fade by quite a bit.

Astronomers have recently discovered a wide “halo” of stars around the clusters. It forms long filaments that extend hundreds of light-years into space. Because the clusters are so young, the stars in the halo weren’t pulled out of the clusters. Instead, they probably formed along with them. And they plow through space together — extending the size of the beautiful Double Cluster.