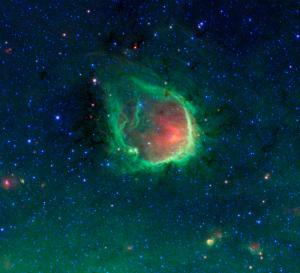 This bubble of hot gas is giving birth to new stars in the constellation Scorpius. Known as RCW 120, it's about 5,500 light-years away and spans about 15 light-years. A "hole" at top left appears to be letting some of the hot gas flow out into the surrounding space, which is less dense than the interior of the bubble. The bubble was formed by winds from a hot young star, which piles up material around it, forming a shell. Stars have been born in that shell, where others are still taking shape. [NASA/JPL-Caltech/GLIMPSE-MIPSGAL Teams]

It doesn’t take long to give birth to a star. A nursery in the tail of the scorpion seems to have done it in just 150,000 years — the blink of a cosmic eye.

RCW 120 is a bubble of hot gas about 5500 light-years away. It’s about 15 light-years across. It’s mostly round, with a hole in one side that’s releasing hot gas into space.

The bubble was formed by radiation and winds from a hot, massive young star. They push away gas and dust around the star like a snowplow clearing a highway. All of that material piles up, forming the bubble.

As the bubble expands, it sweeps up even more gas and dust. It also rams into dense knots of material. The expanding bubble squeezes those knots, causing some of them to collapse. The gravity of such a dense blob then pulls it together to form a star.

From the rate at which the bubble is expanding, astronomers calculated that it started forming only about 150,000 years ago. But several knots along the bubble’s edge have given birth to brand-new stars, or they’re in the process of giving birth — an indication that it doesn’t have to take long to make a star.

RCW 120 is in the middle of the region outlined by the curving tail of Scorpius. The scorpion is low in the south at nightfall, with the tail just above the horizon. Through a telescope, RCW 120 looks like a small ring. In fact, it’s also known as the Green Ring Nebula — a busy nursery for new stars.