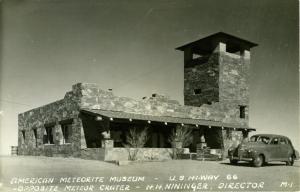 Harvey Nininger, perhaps the world's leading expert on meteorites, opened the world's first meteorite museum 75 years ago. The American Meteorite Museum was along Route 66, a few miles from the rim of Arizona Meteor Crater, the world's best-preserved impact crater. Nininger collected, studied, and traded meteorites, and is considered one of the founders of the field. Thousands of visitors stopped by the small museum, which Nininger was forced to relocate after the highway was moved. All that remains today are a few crumbling ruins. [Wikipedia]

In the summer of 1946, Harvey Nininger packed his family and his meteorites and headed west — or farther west. He moved from Denver to a sandstone-brick house on Route 66, near the Barringer Meteor Crater in Arizona — the most impressive crater on Earth. And he set up the first museum dedicated to space rocks: the American Meteorite Museum.

Nininger was the leader in the collection and study of meteorites. He’d been teaching biology at a college in Kansas when he saw a bright meteor in 1923. It inspired him to change careers. There were no jobs in the field, though, so he struck off on his own. By 1946, he’d gathered thousands of meteorites. And he’d studied their composition, formation, and more.

His collection had been housed in Denver. But, at age 59, he decided to move to Arizona, where he could study the crater. At the time, not everyone agreed it was the result of an impact — some said it was formed by a volcanic eruption. Nininger’s work supported the impact theory.

Thousands of visitors stopped by his museum. He charged a small admission fee and sold meteorites. A couple of years later, though, the road was moved, so business plummeted.

At the same time, relations with the owners of the crater soured. So Nininger moved away, then sold his collection. Today, his museum is a crumbled ruin off the road to the crater — the home of the first meteorite museum, established 75 years ago.