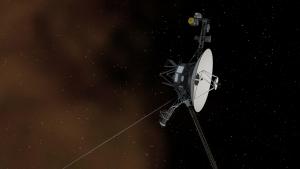 One of the twin Voyager spacecraft heads into interstellar space in this artist's concept. The two probes are still working more than 40 years after launch, and they transmit data on charged particles, magnetic fields, and other properties of the space outside the Sun's protective magnetic "bubble." Voyager 1 is more than 14 billion miles from Earth, so the round-trip communications time with the craft is more than 42 hours. [NASA/JPL/Caltech]

If you don’t like long silences, you probably don’t want to get involved in the Voyager missions. The two probes are so far away that it takes a day and a half or longer to send a message to them and get a response.

Both craft were launched in the summer of 1977. And both of them flew past the planets Jupiter and Saturn. Voyager 2 then flew past Uranus and Neptune. And it’s still the only spacecraft to visit either of those worlds.

After that, the Voyagers just kept on going. And within the last decade, they’ve reached interstellar space — outside the Sun’s “bubble” of influence.

The craft are still operating. Voyager 1 is more than 14 billion miles away. At that range, it takes about 42 hours and 20 minutes to send it a message and receive a reply. Voyager 2 is less than 12 billion miles, so NASA hears from it in a bit more than 35 hours.

Several of their instruments are still working. So they beam us information on conditions in the region between stars. The signals are so weak that it takes NASA’s largest tracking antennas — 230 feet in diameter — to hear them.

And the signals keep getting weaker. In part, that’s because of the increasing distance. But it’s also because the plutonium that powers them is decaying. Within a few years, the craft won’t produce enough energy to operate their transmitters. So the Voyagers will go silent — half a century after leaving Earth. 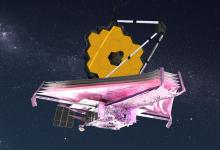