An old friend is rising into view in the early morning sky, as it does every year at this time. It’s so bright that it’s easy to spot even through the light of the bright Moon.

Orion the hunter climbs into good view in the eastern sky by about 4:30 or 5. Look for its “belt” of three stars. They form a short line that points up from the horizon.

Like all the stars in the night sky, those of Orion rise about four minutes earlier each night. Orion pops into good view in the morning sky in late July and early August, and rises earlier day by day. By November, it’ll rise before midnight. And by Christmas, the hunter will be in view all night.

But it takes an extra four minutes for the Sun to return to the same spot in the sky. So our viewing angle on the background stars moves a bit as a result. That causes the stars to rise and set four minutes earlier each day — allowing them to slowly drift through the seasons. 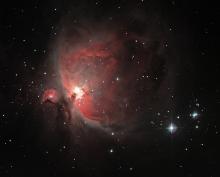