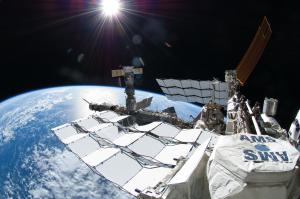 The Alpha Magnetic Spectrometer-2, an instrument designed to hunt for cosmic rays and particles of antimatter, is attached to the International Space Station. The experiment has detected the possible signature of antimatter particles. From its results, scientists calculated an upper limit of perhaps one million antimatter stars in the Milky Way Galaxy. Antimatter and normal matter cancel each other out when they interact. Although equal amounts of matter and antimatter should have been created in the Big Bang, there is little evidence of much antimatter in the present-day universe. [NASA]

If you bring your starship out of warp drive close to an unexplored star, be careful. There’s a slim chance it could be an anti-star — a star made of antimatter.

Antimatter is the oppositely charged counterpart of normal matter. When matter and antimatter meet, they destroy each other in a burst of energy. Other than the charge, though, they’re just alike. So from afar, it’s almost impossible to tell a normal star from an anti-star.

In fact, there probably shouldn’t be any antimatter stars at all. Matter and antimatter were made in the Big Bang. Today, all we see for sure is normal matter. The antimatter appears to have been cancelled out in the early universe.

But a few years ago, an experiment in space caught a few possible bits of antimatter. So astronomers went looking for a source.

They looked for unusual sources of gamma rays — the energy produced when matter and antimatter collide. And they found 14 candidate stars.

The candidate objects may well turn out to be something besides antimatter stars. Just in case, though, it may be a good idea to keep your shields up when you visit an unexplored star.