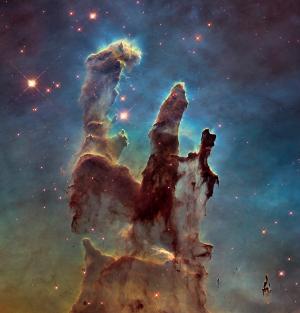 This Hubble Space Telescope image shows the "Pillars of Creation" -- towers of gas and dust that are giving birth to thousands of new stars in M16, the Eagle Nebula. Many of the newly forming stars are embedded in dense knots of material, which form glowing red spots in the towers. The pillars are being eroded by winds and radiation from powerful young stars. That process is exposing some of the knots where stars are being born, at the tips of "fingers" along the edges of the pillars. [NASA/ESA/Hubble Heritage Team]

The Space Age has produced some remarkable images: astronauts walking on the Moon, the rings of Saturn, the surface of Pluto. But few are more impressive than the Pillars of Creation. Snapped in 1995 by Hubble Space Telescope, the picture shows three towers of dark gas against a colorful background. Embedded inside the towers are the glowing “eggs” of newly forming stars.

The pillars are part of the Eagle Nebula — a cloud of gas and dust that’s more than 50 light-years wide. It’s in the south after night falls, above the “teapot” outlined by the stars of Sagittarius. It’s too faint to see with the eye alone.

The nebula is a stellar nursery. Over the last few million years, it’s given birth to hundreds of stars.

Its most massive stars are much bigger, heavier, and hotter than the Sun. They pump out lots of ultraviolet energy. That causes the surrounding gas to glow like a neon bulb, making the nebula look red. Its outline resembles an eagle with wide-spread wings.

The Pillars of Creation account for only a small part of the nebula. The tall pillars contain pockets of dense, cold gas and dust — known as eggs — that are collapsing to form even more stars.

But the hot young stars are blasting away the surrounding gas and dust. That shuts down star formation. In another hundred thousand years or so, all of the raw materials for making new stars may be gone — toppling the remarkable Pillars of Creation.