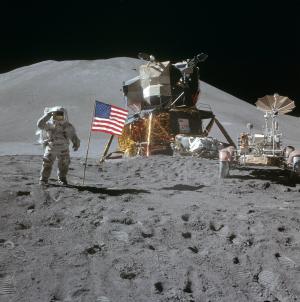 Apollo 15 astronaut Jim Irwin salutes the American flag during one of three moonwalks in July 1971. The lunar module Falcon and the first lunar rover are behind him. The scene is framed by the Apennine Mountains, which are one of the tallest mountain ranges on the Moon. Irwin and Dave Scott spent three days on the lunar surface and drove the first rover. [NASA]

The crew of Apollo 15 had a spectacular view. The astronauts landed at the edge of a deep canyon, near the base of some of the tallest mountains on the Moon. For scientists, the site offered a chance to study several eras of lunar geology.

They entered lunar orbit 50 years ago today, aboard their command module, Endeavour.

APOLLO 15: Hello, Houston, the Endeavour is on station with cargo, and what a fantastic sight. CAPCOM: Beautiful news! Romantic, isn’t it?

The next day, Scott and Irwin boarded the lunar module, Falcon, and headed for the surface.

FALCON: Eight feet, minus one. Contact! Man! Okay, Houston, Falcon is on the plain at Hadley. CAPCOM: Roger roger, Falcon.

The site was ringed by the Apennine Mountains, which are almost three miles high. They formed when an asteroid slammed into the Moon four billion years ago. Shockwaves piled up layers of rock. So geologists hoped the base of the mountains might offer samples of the Moon’s early crust. The site also offered details on the impact.

Falcon landed at the edge of Hadley Rille, a canyon a mile wide and a quarter of a mile deep. It probably formed when a lava tube collapsed. So it offered a chance to study recent volcanic activity — at one of the most spectacular sites on the Moon.